Density map of ant movements during a colony relocation from the bottom of the image to the top.

We are interested in the evolutionary and ecological basis of animal behaviour, and how different behavioural strategies can allow organisms to adapt to changes in context. We use hymenopteran model systems (ants, bees and wasps) to investigate various themes. The lab currently focuses on two main areas of reserach: 1. complex systems biology and collective behaviour and 2. Adaptive strategies in social organisms.

Highly integrated groups of individuals can effectively function as single entities (‘superorganisms’). Social insects are paragons of cooperation and collective achievement: tens, thousands, or millions of individuals can act in concert to achieve complex tasks, far beyond the capacity of a single individual. We use the Japanese ant, Myrmecina nipponica as a model system of collective behaviour.  This small ant (3-4mm) forms small colonies (10-70 individuals) and is distributed throughout Japan and into Korea. This species can be easily maintained in the laboratory, and all colony members individually marked, allowing accurate quantification of individual contributions to collective tasks. 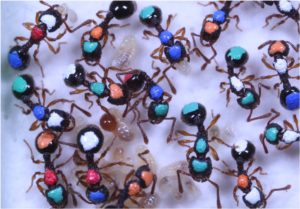 In deciding among candidate nesting sites, M. nipponica employs pheromone trails to recruit scouts to sites of interest, but a choice is not made until a quorum of individuals is at one of the new sites. Quorum size is correlated with colony size, leading to remarkably consistent relocation dynamics in different sized colonies. However, colonies can be induced to make poor decisions by priming them with misleading information in the manner of human fashions or fads, but only up to a limit: ants rely on their own, private, information when social information strongly contradicts it. Ant movements during relocation can be tracked using video software and marked ants to quantify individual contributions to the emigration process. 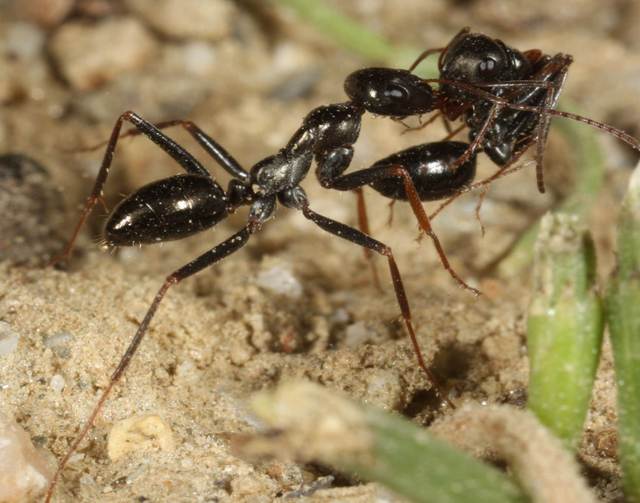 Modes of reproduction vary markedly between and within species. Offspring quantity and quality can greatly influence offspring survival and dispersal, and this has a profound impact on the ecology of a species and the ecosystem it inhabits.

Reproductive strategies in ants are diverse and represent extremes of the offspring investment spectrum. Many ant colonies initiate new colonies by sending out hundreds of thousands of winged queens, which disperse via flight and found new colonies alone. This high dispersal, low-success mode is known as Independent Colony Foundation (ICF). At the other extreme is Dependent Colony Foundation (DCF; also known as budding or swarming), under which, new colonies are started by a group of individuals consisting of one or more queens and many workers. These DCF ‘propagules’ depart the parent nest on foot (workers have no wings) and dispersal is thus constrained, but new colonies are more likely to succeed and being with an established workforce.

These two modes represent a highly competitive strategy (DCF) and a colonisation oriented strategy (ICF) and this may allow these strategies to coexist in many environments and the advantages of each may help sustain polymorphisms in species with variable reproductive strategies. Reproductive strategy is often linked with queen morphology; as DCF queens cannot fly they no longer require flight-related characteristics. DCF is often associated with the evolution of ergatoid (worker like) queens, and this can be used to infer reproductive strategy based on colony excavations or collection of queens. 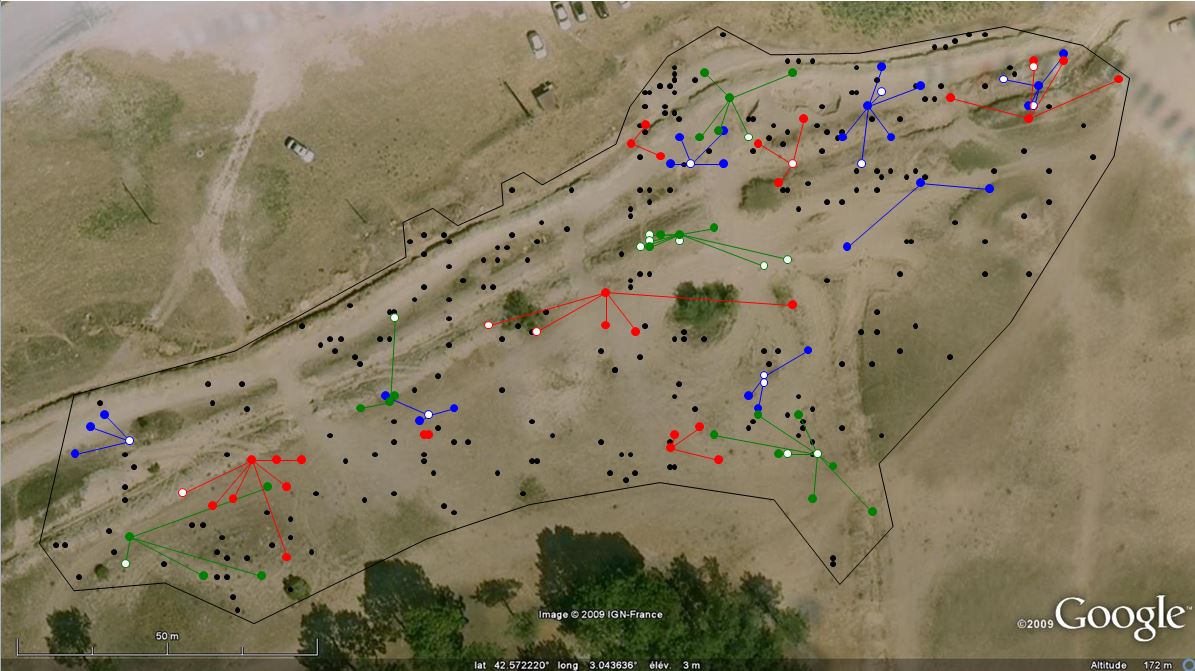 Reproductive investment in offspring faces a classical trade-off between offspring number and offspring size. The mode of colony reproduction can greatly influence species ecology and dispersal, but the phenomenon is difficult to study empirically in the field. Ongoing work in collaboration with Thibaud Monnin (UMPC Paris) and Claudie Doums (EPHE Paris) uses field based studies using the ant Cataglyphis cursor which is particularly well suited to monitoring of this behaviour. Cataglyphis cursor reproduces via colony fission. In the south of France this species inhabits sandy coastal dune habitats where it is possible (with enough people and enough time) to track the process of colony fission. In spring, gynes (young virgin queens) emerge from the nest entrance to mate then, along with various other workers and brood, are carried to a new nest site by transporters. Resource allocation is a dynamic process during the ~1 week fission event for each colony, and workers may be reallocated during this time as nests are abandoned or new ones created. We showed that colonies divide on average into 4 new nests, with a highly variable number of workers, and that the number of workers allocated depends on the ecological context. 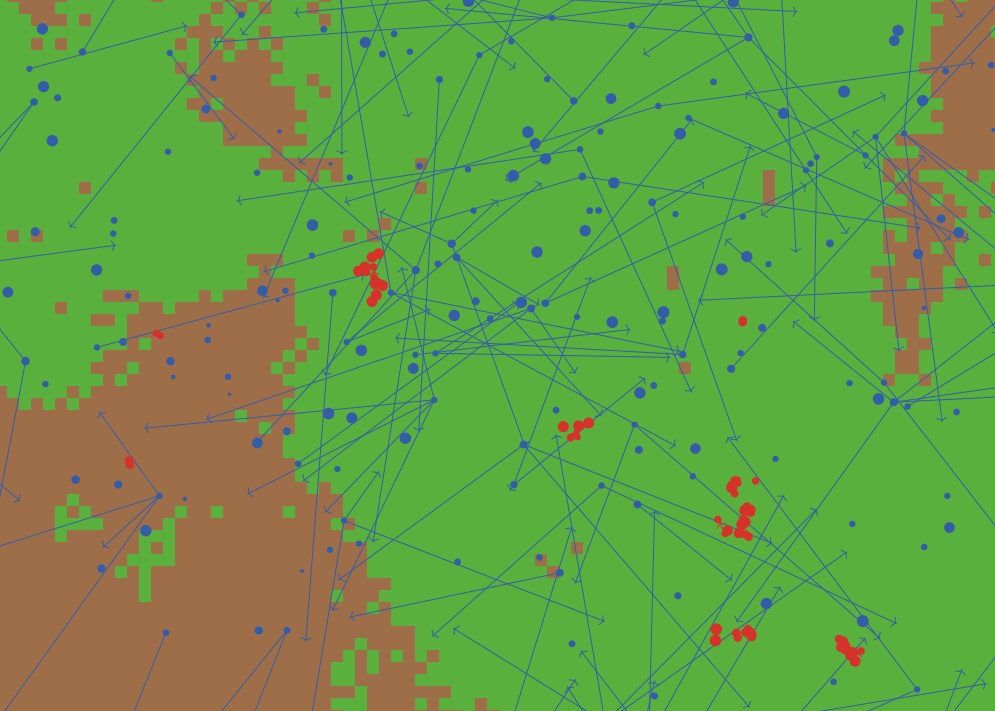 We use agent-based models to explore the evolution and success of ICF and DCF under a range of different environmental conditions. This should allow us to make predictions about which conditions favour one strategy over another, and help understand the repeated evolution of DCF across social insects.

In Myrmecina nipponica, both ergatoid (worker like) and gynomorphic (winged queens) exist, and these are associated with different modes of colony foundation. In addition, at least one clonal population of this species has been found. The geographic spread of colony founding strategies in this species suggests it is ecologically linked, with DCF more common in higher latitudes. An ongoing collaboration with researchers in Japan and Australia investigates the evolutionary and ecological basis of different reproductive modes in this species.